We have lost in Iraq, and no gradualism, no untethered optimism, no good intentions will suffice at this point. We must either win, properly, or admit that we have lost.

I now return you to your regularly scheduled hiatus.
Posted by Ahistoricality at 10:54 PM No comments:

"The best argument is that which seems merely an explanation." -- Dale Carnegie

"The various admirable movements in which I have been engaged have always developed among their members a large lunatic fringe." -- Theodore Roosevelt

"In formal logic, a contradiction is a sign of defeat; but in the evolution of knowledge it marks the first step in progress towards a victory." -- Alfred North Whitehead

"The old nobility would have survived if they had known enough to become masters of printing materials." -- Napoleon Bonaparte

"I'd rather be caught holding up a bank than stealing so much as a two-word phrase from another writer; but ... when someone has the wit to coin a useful word, it ought to be acclaimed and broadcast or it will perish." -- Jack Smith
Posted by Ahistoricality at 12:12 AM No comments:

Normally I don't do meme-tag requests, but this one includes a citation to a huge collection of epigrammatic wit and wisdom.

Go here and keep clicking (you may want to check the boxes for expanded quote collections at the bottom) until you find five (or six, I never was good at numeric memes) quotations that represent you.Second meme: Six random things about me.
Posted by Ahistoricality at 10:42 PM No comments:

"Just as a tree without roots is dead, so a people without history or culture is a dead people." -- Malcolm X

"If you want the present to be different from the past, study the past." -- Baruch Spinoza

"How many disputes could have been deflated into a single paragraph, if the disputants had dared to define their terms." -- Aristotle

"If at first you don't succeed, try, try again. Then quit. There's no use being a damned fool about it." -- W. C. Fields

"Methuselah lived to be 969 years old ... You boys and girls will see more happen in the next fifty years than Methuselah saw in his whole lifetime." -- Mark Twain
Posted by Ahistoricality at 2:48 AM 2 comments:

If you take a cheap digital camera (fixed lens, 4Mp) set on macro, and put it up against the eyepiece of your telescope on a full moon.... 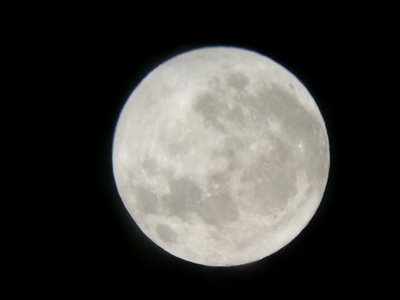 I know I could get better, if I was a bit more careful with focus and steady. But this was more of a "test of concept" and I'm thrilled.

Back to your regularly scheduled hiatus.... (actually, I'm gonna start doing more of the quotations file soon, just for fun. Not really blogging, so much as finishing something I started a long time ago.)

Update: You just can't win sometimes. Cool.
Posted by Ahistoricality at 3:05 AM 4 comments: