It's been two years since I did BADD, so I thought I'd update folks on what's new: CHESS. My spouse has learned how to play chess. It all started with Lewis Caroll. After reading Through the Looking Glass to the Little Anachronism, my spouse (hereafter abreviated M.S.) got interested.

The Hadley School for the Blind Correspondence Courses (beginner and strategy) are the first step. Not that I couldn't teach the basic moves, and I did to some extent, but I've never studied chess formally, taught anyone to play and had no ideas whatsoever about how to adapt the game. M.S. has always had a bit of nervousness about spatial/strategic games, but figured it was worth trying. 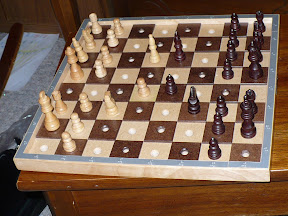 The Hadley course comes with an adaptive chessboard: 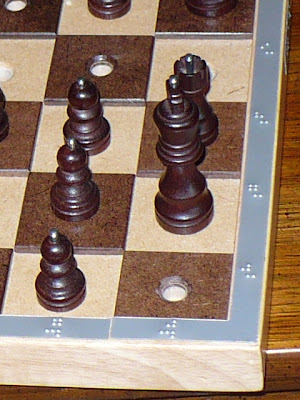 Once M.S. got past the basic course, we started playing, and it quickly became part of our Saturday night routine. At first, I was serving very much as a tutor: making suggestions, warning of potential problems, allowing lots of take-backs. But while that was going on, M.S. was working through the strategy and principles course, reading through famous games, learning ways to understand what's going on that are well beyond my ken. I've never, as I said, studied chess (I studied Go and Shogi a bit, but it really doesn't help), and I haven't played regularly since high school. (Yeah, I was one of the geeks playing chess in the lunchroom and the library -- not a club, but regulars. We invented variations, like teleporting pieces to random places [the eight-sided D&D dice {I said I was a geek} came in handy] once a game instead of moving them.) As time has passed, I've been giving M.S. less and less advice and fewer take-backs. Two weeks ago we had our first game in which I basically gave no advice at all and M.S. never had to retract a move; in fact, the one truly dumb move of the game was my attempt to be aggressive and clever with a bishop, forgetting to note the plethora of pawns with which said bishop could be removed from its forward position; I still won, but it was a tight game most of the way.

In between our Saturday nights (and we don't make it every week, either), M.S. has been playing e-mail games with other members of the United States Braille Chess Association, and getting lots of great feedback and advice from some of their better players. Then there's the talking computer chess game, which M.S. uses to practice particular strategies and focus on error-free play. I don't think I'm going to win too many more before I start losing, and I actually expect to start losing big. M.S. is more careful than I am, more likely to take time to think things through, more devoted to practice and rapidly getting a really good feel for the board and the flow of the game.

It's been fun for all of us. Little Anachronism likes to play the talking computer chess on the lowest setting and M.S. follows along on the board to provide advice and practice position reading. We've added a new dimension to our relationship, and M.S. feels like the mental exercise is really worthwhile. Disabled or not: chess is a great game!

Now, go read the rest of the Blogging Against Disabilism Day posts and have a great May Day!
Posted by Ahistoricality at 12:54 AM

Thanks for the detailed description--and the close-up photo. It's the combination of adaptations, isn't it? Not just one design change, but a whole list of creative "tweaks", that makes it work so well. Very cool.

D&D dice? Hmmmmm..... that might make a lot of games more interesting, from Candyland (shudder) to Scrabble....

I've always wanted to learn how to play chess. Loved your description. I really don't have any excuses any more. :-)