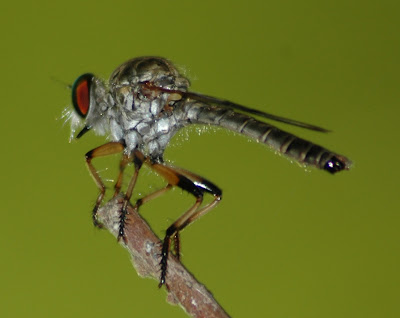 Posted by Ahistoricality at 9:49 PM

That is AMAZING. How in the world do you do this fantastic macro stuff? I'm really impressed.

When my 80-300mm zoom lens broke a while back (that happens when you drop it from eight feet up and then land on it!) I decided to replace it with this (or something very like it, I don't have my big camera kit handy) which has the ability to use the long end of the zoom from a fairly close distance when it's on the macro setting. So I'm using a 300mm lens, which is great magnification (roughly around the 10x-12x range on most digital compacts), and I can get as close as four feet (without macro, usually you can't get closer than ten at that magnification).

Then I crop everything that isn't bug: this is pretty much just the middle 10% of the image.

I keep meaning to spend more time trying to identify the bugs and flowers and animals I take pictures of, but I've never put the time in to get comfortable with the reference books I've bought. I should, though, it's fun to actually know what you're looking at. "Robber fly": great name!