According to the U.S. Department of Transportation's (DOT) Air Travel Consumer Report, U.S. airlines experienced a higher rate of flight delays, more reports of mishandled baggage and a higher number of complaints about airline service in 2005 than in 2004.

On-time Performance: According to information filed with the Bureau of Transportation Statistics (BTS), the 20 airlines reporting on-time performance with DOT recorded an on-time arrival rate of 77.4 percent in 2005, down from the 78.1 percent mark of 2004.

Mishandled Baggage: Carriers also recorded a rate of 6.04 reports of mishandled baggage per 1,000 passengers last year, up from 2004's rate of 4.91.

Consumer Complaints: The Department received 8,735 complaints from consumers about airline service last year, up 17.2 percent from 2004's total of 7,452 complaints.

The monthly report also includes data on the causes of flight delays, as well as information on flight cancellations and on consumer disability and discrimination complaints received by DOT's Aviation Consumer Protection Division.

This report also includes data on airline reports of oversales ("bumping") during the fourth quarter and January-December 2005, as well as reports required to be filed by U.S. carriers of incidents involving pets traveling by air.

Just for fun I looked at the causes of lateness: 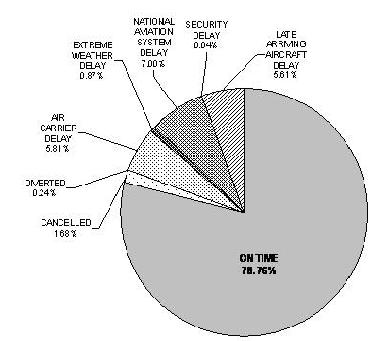 Of the flights that arrived late, just over 5% were weather delays, but over a third were "National Aviation System Delays" (which means, I'm guessing, too many planes trying to takeoff and land from too few runways) and a quarter each went to Late Arriving Aircraft (too few planes on hand) and Air Carrier Delays (too few people trying to service the planes). Can we say infrastructure and efficiency, boys and girls? Penny-wise and Pound-foolish, as we used to say...
Posted by Ahistoricality at 2:04 PM