What Can the Government Know?

A lesson in institutional epistemology, from the brilliant Caleb McDaniel:

It's a long post, but every paragraph would qualify as a "best of the week" post at most blogs, and the sum total is a devastating review of the administration's intelligence operations, public relations and, just for fun, our own cultural proclivity to worship at the shrine of data (and experts)....

It's particularly worthwhile because it goes a long way towards explaining and debunking the reasons for early polls showing popular support for the NSA's illegal "PTA Phone Tree Alert" project. (also note, in the same poll, that a majority of the respondents thought the press was justified in revealing the secret program, which, I suspect, indicates that the "support" figure is pretty soft and will move.... Particularly as more people talk about blatant corruption, which is another purpose to which information can be put...

This, by the way, goes a long way to explaining the President's twenty-something approval ratings: more distorted information, but people still mostly believe what they see and fell than the numbers. Sometimes that's an anecdotal fallacy; sometimes it's entirely justified.... 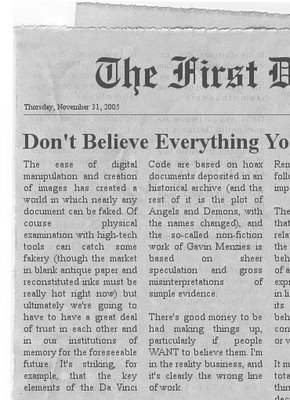 Posted by Ahistoricality at 3:58 PM